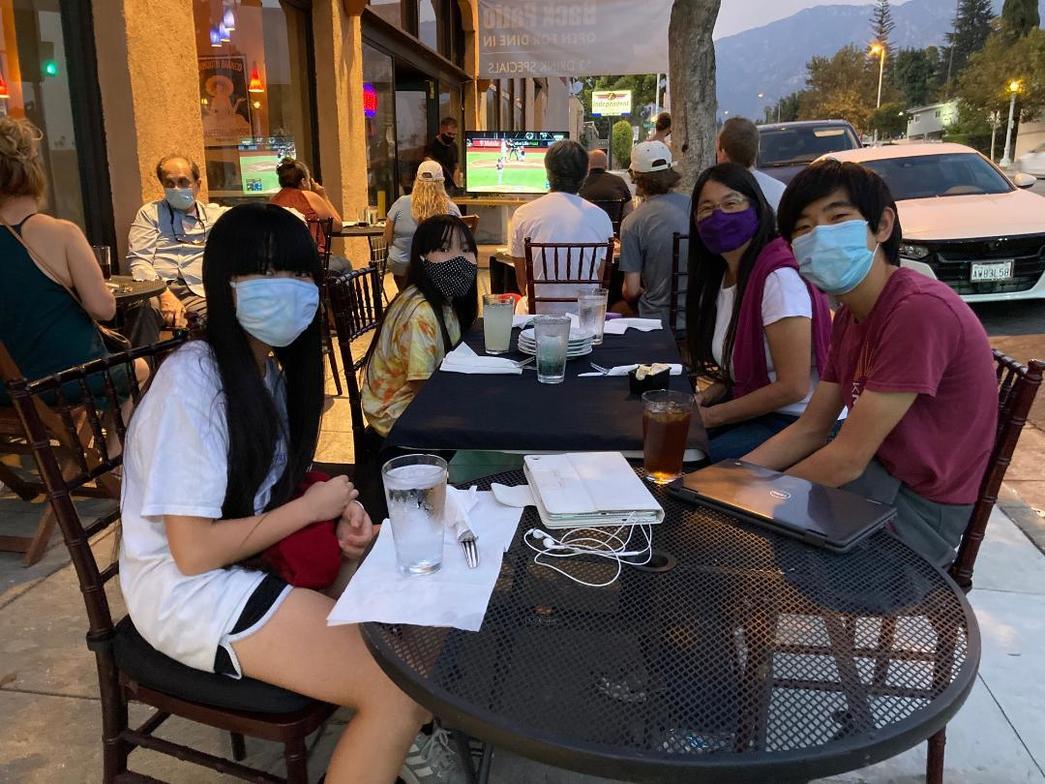 How about them Dodgers?  Did you catch the game?  On Sunday night, the Dodgers played the Braves in Game 7 of the National League Championship series with the winner going on to the World Series.  The Dodgers got behind early in the game 2-0 but came back to win in exciting fashion 4-3!  Now if you're not a Dodgers fan or a sports fan, that's quite alright.  When we think about all the things going on in our world today and the things that truly concern us, this probably should not be one of them.  But we can still root for our local team right?  From that standpoint, Sunday night's game was very interesting.

It started when we decided to go out to dinner for the first time in like 10 months.  Excited, we found a local place with nice outdoor seating (if you consider sitting on the sidewalk next to the street nice).  It didn't seem that great initially but, in the end, it turned out to be fine.  Maybe we just hadn't eaten out in such a long time that anything would have been better than home.  However, I think what made it most enjoyable was the energy and camaraderie shared with those around us because of the game.  A large TV monitor had been set up on the sidewalk for guests to watch while eating.  It was all very strange at first but as dinner went on the game got more interesting and drew us in (okay maybe not my girls).  Everyone seemed to go up and down together with the Dodgers as they tried to come back.  When they would get a hit or make a great play, everyone cheered.  When they would strike out or miss an opportunity to score, everyone would groan.  Just before we left, the Dodgers tied the score and everyone was celebrating in a socially-distanced fashion.  That means cheering, acknowledging each other, and giving virtual high-fives.  What strange times we live in.  Seeing how fervent people were about the game, our daughter Avery said she couldn't understand why people would cheer for a team just because it represented their city.

It's funny how sports does that sometimes.  I've had plenty of experiences celebrating and high-fiving strangers at Dodgers, Lakers, USC games in the past.  Haven't you ever felt a sense of sympatico with others when your team won?  After the Dodgers had won on Sunday, the news showed various celebrations around LA.  Bear in mind the Dodgers still have to win the World Series to claim the title but sports does that to us sometimes.  It creates an energy and bond between us because we share in the same team's fortunes.  There is something in all of us that longs for unity and community like this and I think the pandemic has only increased that desire.

Well the Father, Son, and Holy Spirit that binds us together, offers us community far beyond anything this world or sports has to offer.  In Colossians 3, the Apostle Paul says we're all bound together in Christ as one.  In verse 11, he says "Here there is no Gentile or Jew, circumcised or uncircumcised, barbarian, Scythian, slave or free, but Christ is all, and is in all."  This means as Christians, differences aside, we're all on the same team.  Then he gives us God's instruction about what to do to build community within us.  "Therefore, as God’s chosen people, holy and dearly loved, clothe yourselves with compassion, kindness, humility, gentleness and patience. Bear with each other and forgive one another if any of you has a grievance against someone. Forgive as the Lord forgave you. And over all these virtues put on love, which binds them all together in perfect unity."

I love that when the Dodgers do well it brings Angelenos together.  We all need community.  Go Dodgers!  But how much better would it be for us to come together under Christ and experience true community as we clothe ourselves with godly compassion, humility, forebearance, forgiveness, and love.  As God's chosen people, let us follow scripture's guidance.